Zimbabwe has over 12 million inhabitants and is a landlocked country in Southern Africa. It is famous for its beautiful nature, the 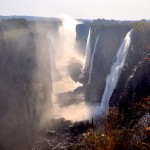 ruins of Great Zimbabwe and the Victoria falls, which are considered as the world’s most beautiful waterfalls. Zimbabwe has a tropical climate tempered by altitude, with a rainy season that generally runs from late October to March. Natural landscapes includes the Savannah and tropical forests in the moist and mountainous regions of the east. The fact that it is located on the highlands is why Zimbabwe has an average annual temperature of 25 ° C , relatively low compared to its neighbours in Southern Africa. Although Zimbabwe only gained real independence in 1980 after several years of being ruled by a white minority, the Zimbabwean people kept their traditions and culture including their delicious cuisine.

The biggest ethnic community in Zimbabwe are the shona (almost 70 %) followed by the Ndebele (20%). These two tribes and others all

have their own specialties, although Zimbabweans share allot of dishes among each-others which are famous across the country. Because of the long presence of a white minority in the country some of the dishes of Zimbabwe include typical European ingredients.

However the most common stapplefood in Zimbabwe is a typical African cornmeal mixture called Sadza. Which is served in traditional families with almost every meal (Breakfast, lunch and dinner) and can be served with different vegetables or meats. Other famous Zimbabwean recipes include peanut butter rice and the for some westerners the perhaps scary snack of mopane worms.  Having no access to Sea, seafood are not that common in the country. Fish is eaten only in the communities bordering big rivers and lakes. Next to these typical African dishes many Zimbabweans also eat typical British or ‘Afrikaner’ snacks and foods (like biltong and boerewors) and many more other dishes. Below you will find a full list of delicious Zimbabwean foods and Zimbabwean recipes.