Sweet Potato is a root vegetable commonly used in Africa. Although the name might suggest it the sweet potato, also know as Batata, is not related to the normal potato and doesn’t not belong to the same family of plants.  the Batata is part of the so called Convolvulaceae family which also includes allot of ornamental plants. Although it might not be related the apereance of the Sweet potato makes it clear why it got its name, because it looks like a huge potato which has a sweet taste. The Root vegetable comes in many variaties with different sizes and colors and is used in many different countries around the globe. In Africa the tuberous roots are used all over the continent from Morocco to Kenya and Nigeria. It is a common staple food which is both fried or cooked. In egypt for example batata is a common street food snack and many East and West African dishes include fried, cooked or mashed sweet Potato. Both the white fleshed as orange fleshed root vegetables are used all over the African continent. the flavour of the different variants differs a bit, but both have a familiair sweet taste which is both nice cooked or fri. check out the different African dishes below which include Sweet Potato. 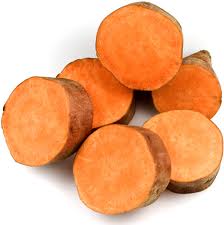