The foods and cuisine of Senegal is considered one of the richest and most varied of West  Africa. This is because of the fact that the 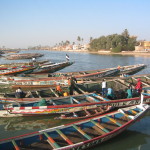 cuisine and recipes of Senegal have been influenced not only by other West African countries, but also by its northern Arab neighbors like Mauritania and Morocco with whom they share their religious affiliation. Furthermore Senegalese food has also been influenced by French and Portuguese cuisine through colonialism and trade. All these influences and fusions make Senegalese food to have one of the richest flavors on the continent.

Having dinner in Senegal is a real social event. Friends, Family and guests sit around one single big plat from which everyone eats with either their hands, a spoon or by using a piece of bread. Everyone 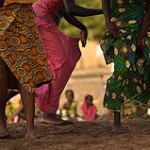 The cuisine of Senegal is as varied as the country itself, However because of the proximity of the Atlantic Ocean fish has an important place in many Senegalese dishes. One of the most common used fish is the white grouper, but one can also find mullet, tuna, swordfish or any other of the local rich variety. The preparation of the fish can be done in many different ways. Sometimes the fish braised, others are smoked, dried or salted. This process gives a particular taste to any of the many of Senegal’s dishes. crabs, shrimps, prawns and other seafood can also be found in Senegal.

While Fish is really common, Meat isn’t used that frequent in most Senegalese dishes. Some regions have local dishes which include goat or sheep meat, but the most common meat used in Senegalese dishes is chicken.

Millet and Rice are one of the most important staple foods in Senegal. Often Millet is prepared in the form of Couscous or in a similar way like other west African Fufu. Traditionally the cultivation of rice has been important to the Casamance region and this ingredient has place in many Senegalese dishes of which the most famous one is the Wolof Rice or Thieboudienne.

Often used vegetables in Senegalese recipes are tomatoes, cabbage, carrots and eggplant and okra. While peanuts, especially peanut sauce also has an place in Senegalese cuisine, like in the famous Mafé dish.