Ethiopia is the second most populated country in Africa and has over 90 milion inhabitants. It is one of the oldest countries on the continent and was never colonized by European powers. For this reason Ethiopia has a long cultural tradition which is still preserved 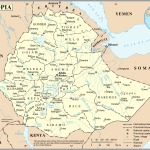 today. Next to beeing one of the oldest countries in Africa it is also of the oldest christian countries in the world with its own alphabeth and calender. Next to Christians of different streams there are also Muslims and Animist among the Ethiopian population who all have their different traditions and foods. The country consists mostly of highlands and has since 1993 no direct acces to sea anymore. the climat is divided in six different climat zones which makes the country very diverse.

The diaspora introduces the world to Ethiopian food

Because there are many Ethiopian immigrants around the globe Ethiopian food gained fame across the world. Many people have 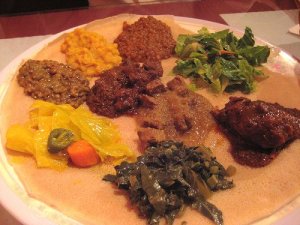 visited an ethiopian restaurant in their neighbourhood or maybe even tried some of the food in Ethiopia itself. The Ethiopian cuisine differs from other cuisines of the sub-Saharan Africa by use of the famous injera , which serves both as a pancake plate and cutlery.The variety of climates enables Ethiopians to grow lots of different vegetables and starches (for example : millet, corn , barley , lentils , split peas, different kinds of beans , oilseeds,  flax , onions , garlic and coriander) . Ethiopian cuisine is based on teff, a grass used to make the injera , a kind of pancake that serves both as a container and tool to serve the food. The other main ingredient is Berber, a kind of red chili. The name Berber also applies to a mixture of spices including pepper (dried), garlic, ginger , red onion, cardamom and cinnamon .The most popular dish is wat, a stew of vegetables, pulses ( shiro ) with meat – lamb, beef, or chicken ( doro wat ). Among the classic dishes are both many vegetable dishes (influence of Christian Copts in the country, vegetarians) and meat dishes, sometimes served raw with chilli (ketfo ).

To see the forementioned traditional ethiopian recipes and other dishes from this east african country check out the list below: