Cassava was first cultivated in South-America, but was imported from Brazil in the 16th century to Africa. The plant did really well in Africa and the Africans liked both the tubers and leaves of the Cassava, or Manioc as it’s called in Francophone countries, and used them in many different African Cassava recipes and dishes. There are many different ways how to prepare the Manioc roots. one way how to prepare the  tubers is to cook them and then wash them extensively with water to remove traces of cyanide. Afterwards they can be dried in the sun and crushed by hand or mill to get a flour called “fufu” in Congo. This flour is mixed with boiling water in equal proportion and is a food that accompanies stews. It can also be given to young children. Fufu has a dry caloric value of 250 to 300 Calories so one can get really stuffed from eating fufu.

Another way is to use Casava in an Africans recipes is as a bread (called “chikwangue” in Congo Brazzaville, “bibolo” in Cameroon and “mangbèré” in the Central African Republic). These breads are rich in cellulose, consistent, but very little nutritious. It is recommended to chew in order not to have digestive problems.

In Mauritius cassava is produced and consumed in the form of biscuits, often flavored with cinnamon and custard in coconut or sesame seeds. The cassava is also consumed as a soup with beef, chicken (called “katkat cassava” ). Cassava leaves are also eaten with rice (“rice-paper”) in the Republic of Congo and the Democratic Republic of Congo under the name “mpondu” , “saka-saka” or “ngunza” or “ngoundja” in the Central African Republic. The Matapa typical dish of Mozambique (the vatapá Brazil) is prepared with young cassava leaves with garlic and flour derived from the tubers, cooked with crab or shrimp. In the Comoros the mataba leaves are accommodated with a minced fish. Consumption of hard boiled leaves can be fatal again because of the presence of traces of cyanide. In Côte d’Ivoire , the cassava is consumed as a steamed semolina, called “attiéké”. The attiéké is a national dish, consumed mainly in the southern regions of the country. It is often accompanied by a local sauce. Cassava can also be consumed in the form of cassava bread called “foutou cassava” or “plakali” mainly consists of starchy substance. The attiéké is preferably consumed fresh. It is preserved and exports markets or dried form. 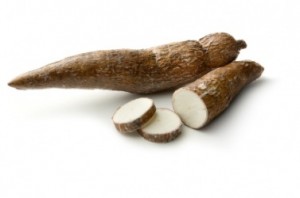 See her a full list of Cassava recipes and Manioc dishes: